Over the entrance to Ballindalloch Castle stands the Macpherson-Grant arms, finely cut in freestone, inscribed with Ye Lord shall preserve thy going out and thy coming in. Either side of the inscription is carved Erected 1546 and the codicil Restored 1850. These two eras, more so than any other, have left their mark upon the architectural style of Ballindalloch Castle: a tasteful blending of middle-ages fortification and Victorian gentrification that brings to mind a romantic chateau from the pages of a children’s fairy-tale. The furnishings to be found within, however, are broader in their influences and reflect the wide interests and extensive travels of the Macpherson-Grant family from the 18th Century to the present day. 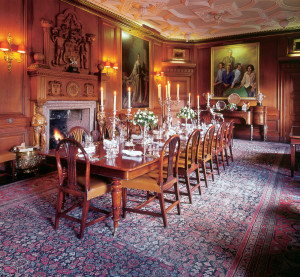 The largest and arguably the grandest room in the Castle is the Dining Room. Entered by a wide staircase from the Hallway, flanked by large oak balustrades, this was once the Great Hall; the beating heart of the original 16th Century fortress, whose stone floors once felt the tread of clan chiefs and emissaries of the crown. Positioned centrally, there stands a magnificent fireplace, an original feature, above which hangs the coat of arms of the Macphersons and the Grants. The walls of the Dining Room are decorated entirely in American pine, part of the 1840s restoration commissioned by the 2nd Baronet, Sir John Macpherson-Grant, and carried out by Moray architect Thomas Mackenzie. Most notable amongst the original artworks that adorn the Dining Room are portraits of King George III and Queen Charlotte by the famous Georgian royal artist Allan Ramsay, presented to General James Grant in recognition of his military service in the American Wars of Independence.

The Hallway itself, from which entrance to the Castle is gained, boasts a grand staircase and unusual umbrella and fan vaulting, designed by Thomas MacKenzie as part of the 19th Century restoration. A fine collection of military memorabilia is housed here, including a display of Scottish dirks (or daggers), a compendium of 18th Century pistols and a naval dress sword belonging to Guy Macpherson-Grant’s grandfather, who was 2nd Sea Lord and aide-de-camp to Her Majesty the Queen between 1953 and 1955. Visitors to the Hallway can also view a delightful collection of china displayed in a Sheraton corner cupboard dating from the 1820s, a fine Bureau Plat of Louis Quinze period and a set of Scottish chairs made in the Chinese Chippendale style. 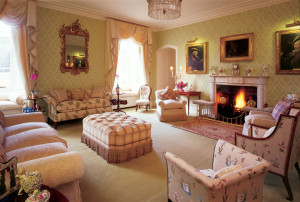 In the north west wing of the Castle can be found the Drawing Room, constructed along with the south wing in the 1770s at the behest of General James Grant. Much of the furniture here is contemporaneous with the room, pride of place being taken by an oval Sheraton table and beautiful gilt mirror which date from the 1750s. Next door is the Laird’s Smoking Room, where in times past the Laird and his gentlemen guests would retire after dinner for cigars and a wee dram. The nice collection of china displayed here dates from the 1770s.

Lady Macpherson-Grant’s Bedroom is also situated in the north west wing, but the decor here reflects the influences of later centuries. Do not be concerned with knocking before entering, for the room, though once her ladyship’s bedroom, is no longer so! The centrepiece of the bedroom is a grand four-poster bed, manufactured in Scotland from cherry wood in the 1860s.

The Library, which was also panelled and refurbished as part of the Mackenzie restoration, is home to the Macpherson-Grant’s private collection of original 18th and 19th Century European literature: a collection which runs to some 2,500 volumes. This valuable archive was begun by Colonel William Grant who was a keen collector of early 18th Century classic English and French literature. Sharing the Colonel’s antiquarian sensibilities, the 3rd Baronet, Sir John Macpherson-Grant, added many historic Spanish texts to the collection whilst serving as Secretary to the Legation in Lisbon in 1850.

At the fulcrum of the two wings of the Castle stands a tower, constructed in the early 1700s. Here, on the first floor, can be found the Nursery. This rather remote and austere room was, in reality, part of the servant’s quarters, but it is used today to illustrate the experience of growing up at Ballindalloch Castle throughout the ages. The furnishings here include a beautiful inlaid Georgian highchair dating from the 1770s, a cane and mahogany cradle from the 1830s, a collection of antique teddy-bears and a dolls’ house made by Mr. Oliver Russell, the current Laird’s father, for his daughter Lucy in 1975. 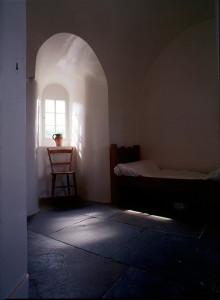 An ascent of the adjoining and steeply spiralling staircase finds the Highland Tower; a caphouse which sits atop the original tower and once served as a watchtower. In later years this lofty room, with its cold stone floor and small arch window, was part of the servants’ quarters. Today it is preserved as such, complete with a simple wooden bed, side table and washing jug; a salient reminder, amidst all the grandeur, that life for the domestic servants of a great house was often ‘a life apart’.

Beneath the stone floors of the original 16th Century Castle there lies a dungeon. Here, where once the enemies of the clan Grant would reside, these past three centuries the wine has been kept. It was once the favourite room of General James Grant, whose ghost is said to walk the corridors of Ballindalloch Castle by night, his spectral journey a vain attempt to rediscover his beloved cellar.

* For more writings on the architecture and furnishing of Ballindalloch Castle please see: 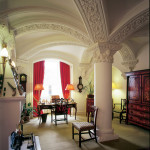 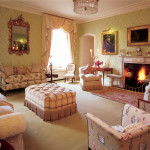 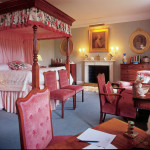 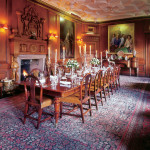 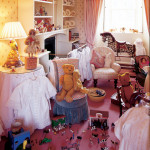 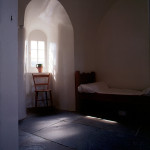 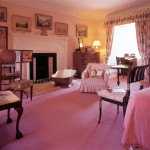 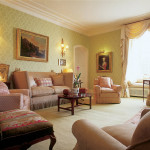 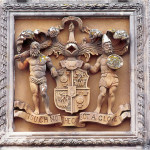